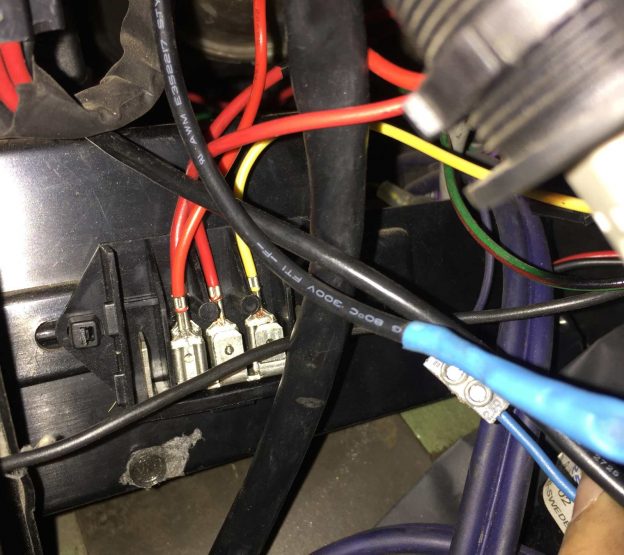 Early 240’s don’t have a lot of fuses, and therefore not many terminals to use for modern equipment such as radio, keyless entry etc. My idea was to branch the power so I only have to use one terminal at the fusebox, and at the same time avoid multiple wires that go to the same fuse. So about two years ago I bought a power distribution block that is aimed at subwoofer/audio use in cars and ran a 2.5 mm2 wire to it from the fuse bock. However, I don’t like what screw terminals do to wires.

Then a week ago I realised that all 240’s already have a perfect power splitter, namely the power junction box next to the headlight relay near the battery in the engine compartment! This exact box is also used inside 700- and 900-series cars. They can often be found in mint condition behind the glovebox, a bit down to right, where one of the LH-boxes are. Some days ago I went to a pick-and-pull and picked and pulled a few boxes and got them for free, since I had no cash.

The box has a total of eight terminals, six of them are standard size 6.3 mm, and the other two, where you’re supposed to connect the power source, are more oddly sized 9.6 mm. The standard six terminals are often adequate, but in some cases I’ve used a Dremel to cut the 9.6 mm down to 6.3 mm.

I zip tied one of the boxes to the right of the lower storage compartment where the radio often lives. There are some factory made holes on the back side of the compartment, so no harm and drilling was done. I used a zip tie and only the “head” of a second zip tie to lock the box in place. Perfect! This is even more professionally mounted than how Volvo did it in the 700/900s, where the box just hangs loose!

The junction box now powers the keyless entry and central locking, the radio memory and some USB things. I will also be mounting one of these boxes in the trunk to distribute power to the in-tank fuel pump, a subwoofer and a trunk light.

Also, VADIS is very useful for finding 240 parts that also are used on other Volvo models. However, VADIS is clearly wrong about the location of the box on the 700/900, claiming that it is located at the left side of the car, when it’s on the right side of the car. I probably spent 20 minutes searching multiple cars at the wrong place before I started to think outside the box…