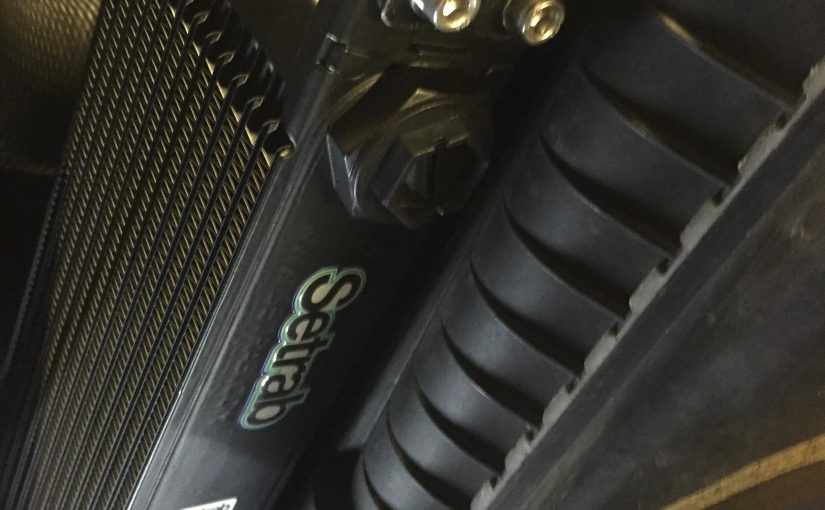 This is a follow up on the 240 Turbo oil cooler hardline-conversion to AN10 post I wrote about a year ago! If you haven’t, read it before this post to get more into depth of what the oil cooler setup consists of!

The later B230FT/B230FK use a water cooled Mitsubishi TD04-13C turbo and therefore Volvo decided not to put a regular oil cooler on those cars like they did on the original 240 Turbos. Instead a heat exchange adapter is mounted where the oil filter normally sits. I needed to delete this setup in my 240 for two reasons:

I had the complete cooler setup from a Volvo 240 Turbo, except for the lower mounting bracket, rubber cushion and the oil cooler itself. I bought a new Setrab ST613 which is the modern OEM replacement, having the same dimensions as the original oil cooler. In this installation the only difference from the original setup is that I’m going to use 10-AN fittings and hoses instead.

To summarise, the oil cooler kit is bolt on, with the exception of one water pipe that has to be plugged (or replaced) and the oil feed line that has to be replaced with a hose. The upper bracket needs minor adjustments if you’re going for the Setrab. Continue reading to get all the details!

I created a paper template based on measurements from an original lower bracket (number 19 in the diagram) since the lower brackets are out of stock forever (you can download the template here). I then used a Dremel to cut it from a piece of steel and a vice to do the 90 degree angles. Finally it was painted with black Temadur 20.

Another piece that is out of stock is the rubber cushion (number 22 in the diagram) that the lower bracket sits on. This can however be made from a standard radiator cushion by cutting some on one end and drilling a new hole.

The upper and lower and brackets were mounted on the Setrab with 20 mm stainless M6 bolts, washers and nuts (the original oil cooler has some special very fragile aluminium fittings). A few mm of the corners of the top bracket had to be “adjusted” with the Dremel for the Setrab to sit flush.

First thing was to drain the car from coolant. The oil does not have to be changed and can stay in the car during the operation, but an oil change is never wrong. The two coolant hoses that go to the heat exchanger has to be unclamped. One is attached to an adapter in the engine block and the other is attached to a pipe that goes around the engine at the back.

The hose in the engine block sits in the same hole as the drain valve on all other redblocks. So I simply took a nut and drain valve from another block I had laying around (Volvo numbers: nut 3531383, drain valve 966723). Don’t forget to Loctite it.

The second hose is attached to the water pipe and is the more tricky one. The B230FK/FT has an extra outlet on the pipe which the other redblocks don’t have. The best solution would of course be to use one of those normal pipes (Volvo 1332032), however it’s a major pain to replace that pipe when the engine is in the car. It was decided to replace it the next time the engine is out. For now, a piece of plugged hose was used as a temporary solution.

At this point I realised that the sandwich adapter from the 240 would never fit because of the oil feed hardline. Luckily, I was replace that anyway with a steel braided 4-AN hose that I already have. So the oil feed hardline was disconnected from the turbo and the engine block. More about this later on.

A nipple (Volvo’s naming) was screwed in the engine block with the short threaded side in the block. This nipple is unfortunately out of stock, but an alternative be found in one of those universal oil relocation kits. A new o-ring (Volvo 967343) was placed on sandwich adapter and screwed on with a large nut, although not fully tightened so the adapter could rotate a bit.

The two hardlines were then loosely mounted on the bracket in the front and with banjo screws and four new washers (Volvo 957179) on the sandwich. It took a lot of wiggling of both the hardlines and the sandwich adapter until I got everything perfectly lined up. For a moment I was worried that the larger Biltema alternator on my car would be a problem, but there’s maybe 2 mm clearance between the alternator and the hardlines! Lastly I tightened every bolt and nut.

Making and installing 10-AN PTFE hoses

The Setrab oil cooler is M22 threaded so you can equip it with the fitting adapter of your choice. Since I’m going full 10-AN, I ordered the M22U-AN10 adapters. They have a built in o-ring and are made of aluminium.

I chose nylon braided PTFE hose, since it’s the most durable, discreet and least paint scratching alternative. And also the most expensive one! Though it’s a big advantage being able to create life long durable custom hoses with perfect lengths yourself, and it’s not particularly hard if you follow this guide.

The oil feed line that was removed was attached to the block with an M14x1.5 banjo bolt, and to the 13C with an M12x1.5 banjo bolt. I now had to adapt them to the 2 ft 4-AN female to male steel braided hose I already had.

On the block I put a brass adapter with M14x1.5 outer threading and 4-AN inner threading and Loctited it. This is a much better solution than an M14 banjo to 4-AN, since it will sit to tight to the engine block. It’s better if the hose connects straight into the block.

On the 13C I put a male M12x1.5 to male 4-AN aluminium fitting and a washer. This is good, because now at least the oil feed is prepared for the T3/T4 turbo (which has a 4-AN male inlet). When I replace the turbo I will replace the leaking oil return as well with a hose, but that’s another story.

The sandwich adapter has a built in thermostat that opens when the oil (not water) temperature hits 75 °C. Just starting the car is not enough, a hard test drive must be done to fully test that it doesn’t leak. Which is kind of intimidating… Everything went well though and I’m happy with the conversion, even though it was a lot of work!

Since I did the conversion I’ve driven hundreds of kilometers without any problems! I recommend doing this if you’re upgrading the turbo but want a OEM style oil cooler installation. 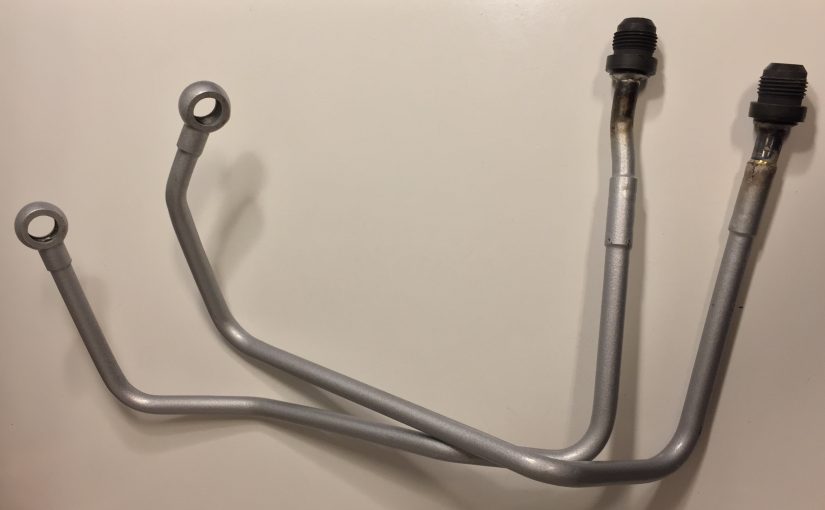